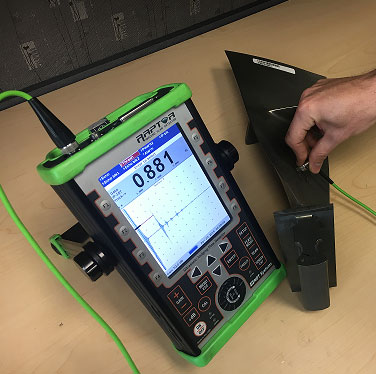 In this latest story from NBC’s Nightly News, metal fatigue in engine fan blades is a major concern for the safety and reliability of an aircraft. Due to this incident and its potential effect on many other aircrafts with similar product engine design, FAA will issue an urgent air worthiness directive for all airlines to conduct ultrasonic testing for metal fatigue. As seen in this video, our flaw detector, Raptor, is utilized to perform ultrasonic testing on fan blades for aircraft engines.

Our flaw detector, Raptor, features an all-in-one high-resolution thickness gauge flaw detector and imaging flaw detector capable of driving a range of manual and automatic scanners. The power of an image cannot be understated and can significantly speed up an inspection and help with interpretation. Our standard software can define the scan area, index resolution and speed and display the resulting images live as they are generated. For more information, visit www.ndtsystems.com/raptor.